What can I do about Gun Violence?

While canvassing today many people asked what they can do to help after the latest school shooting in Florida.

Here is a video of Emma Gonzalez, a survivor of the recent Florida school shooting.
if you find her message inspiring, please join us and act.

A Special Night of Sharing and Organizing 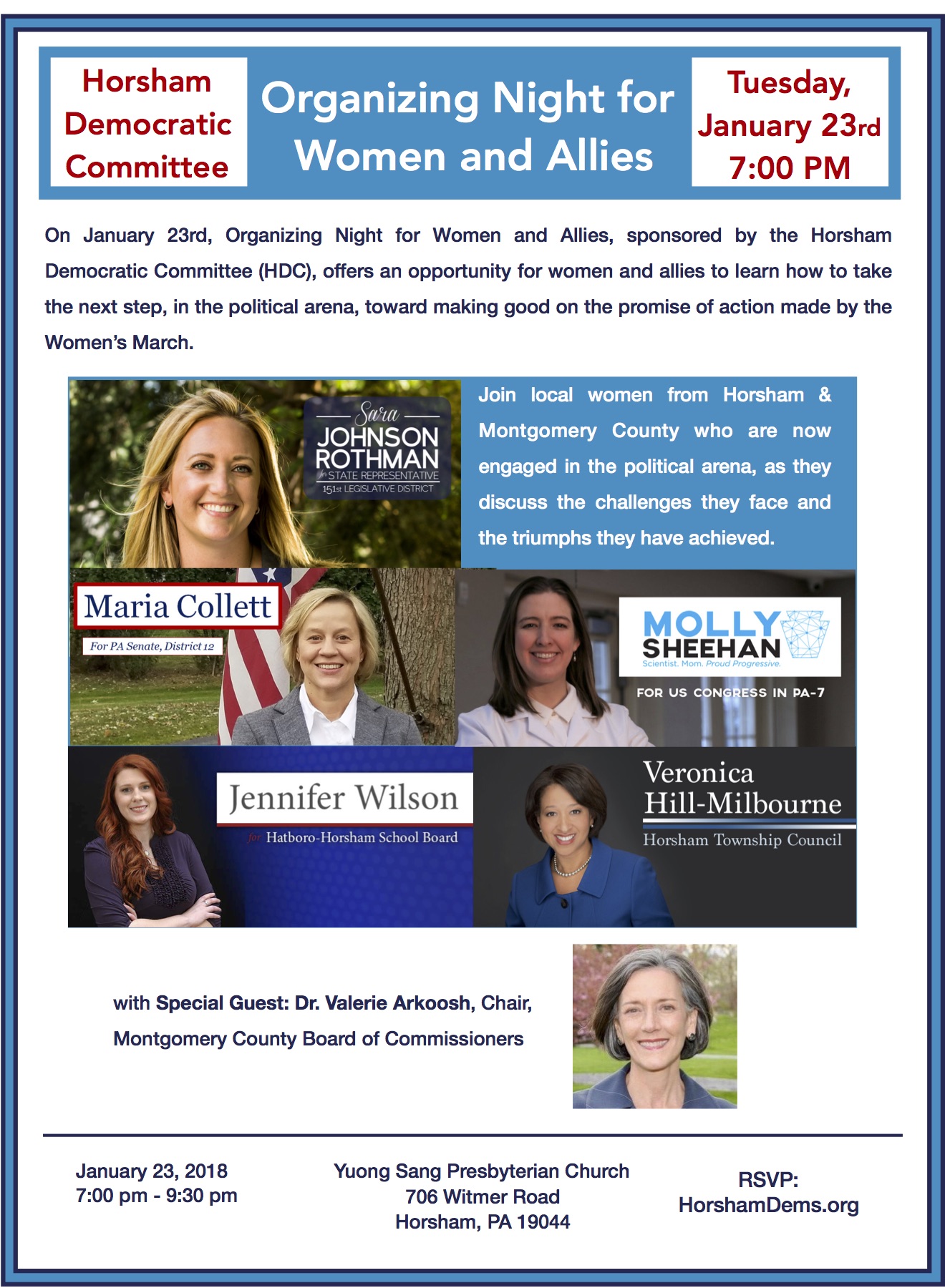 Be a Part of History in Horsham on Tuesday

On Tuesday night Veronica Hill-Milbourne will be sworn in as the first African American woman elected to Horsham council.

This is the key point of a Fox 29 news story aired on December 27th. It is history being made, and you can be a part of it.

The Fox story also pointed out that Veronica Hill-Milbourne and Bill Gallagher, who will also be sworn in on January 2nd, are the first Democratic candidates elected to Horsham council since 1974.

You can RSVP here: http://www.horshamdems.org/swearing_in_ceremony_for_veronica_hill_milbourne_and_bill_gallagher.
Please RSVP, Share, and tell your neighbors!

Call for Volunteers on Township Boards and Commissions

Horsham Democrats elected two candidates to the Horsham Township Council, and they'll be sworn in at the January 2nd Council meeting.

Now let's back them up by getting some volunteers on the various Township Boards and Commissions. There are 11 of these committees, and currently six of them have openings:

A list of all 11 committees; purpose and duties; current members; links to agendas and minutes; and when they meet can be seen on the Township website:  http://horsham.org/pView.aspx?id=10493&catid=610

The way for Democrats to gain a say in Horsham is to be CIVICALLY ENGAGED!

You can engage by submitting an application to serve on a committee. Please send a brief letter to the township office describing your interest, and include your resume (if applicable): Horsham Township, 1025 Horsham Road, Horsham, PA 19044 by December 31st. All valid applications must be considered, and appointments will be made at a January Council meeting. Applications are also put on file, and drawn from if and when something opens up at a later date.

Please contact us if you have any questions about serving,

Posted by Malcolm Stanley · December 03, 2017 10:30 AM
Add your reaction Share
The following unofficial Election results are available on the Montcopa.gov website.
Please note these are still not 'official' as there is one court case open.
We will update again when the results are finally made official and final.

Based on these tables, we congratulate Jennifer, Veronica, and Bill on their new roles in the Hatboro-Horsham School Board and on Horsham Town Council.

Please click here to RSVP for the swearing in ceremony for Jennifer Wilson on Monday December 4 at 7PM.

We wil soon post an invite for the swearing ceremony for Veronica and Bill.

Finally, we are looking for volunteers for the next election cycle, so please visit out volunteer page and let us know how you may be able to help as the 2018 election season begins.

Thanks so much for you support. Your actions do make a difference!

here are the UNOFFICIAL results, as posted this morning at https://electionresults.montcopa.org:

For Hatboro-Horsham School Board, Jennifer Wilson was elected! 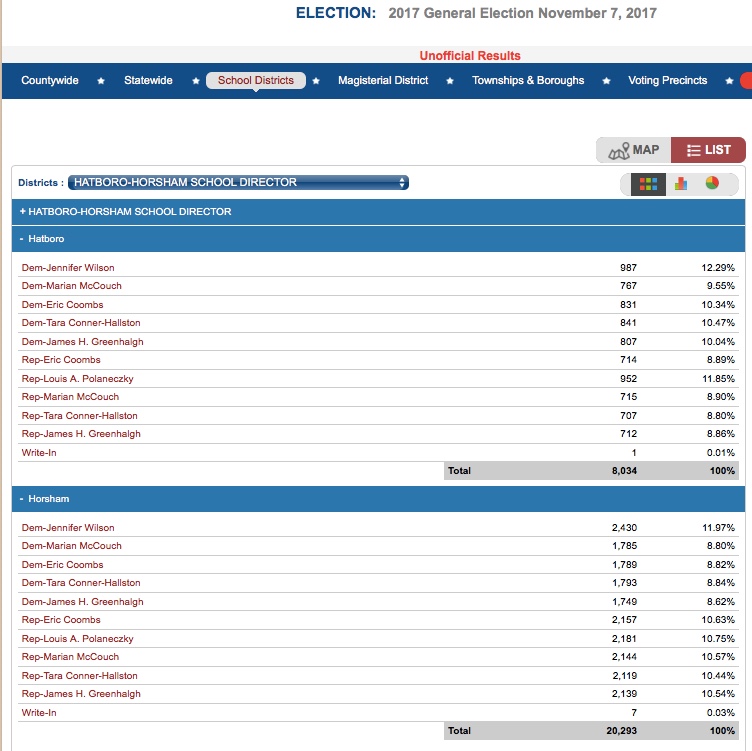 For Horsham Town Council, Veronica Hill-Milbourne and Bill Gallagher are #2 and #3 and will be elected in a tight race if the vote tally is confirmed: 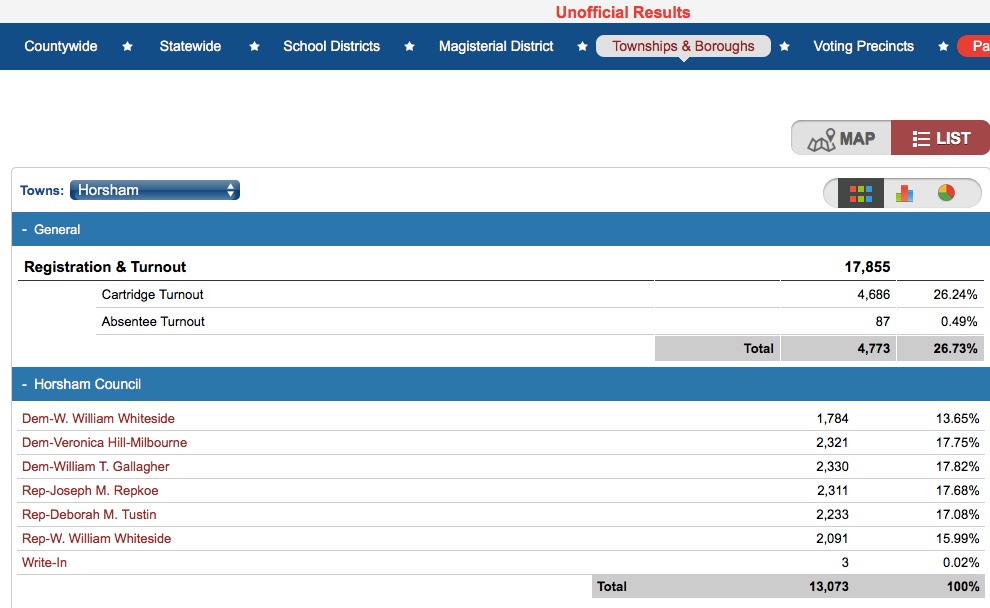 Thanks to everyone who worked on the campaign, and who came out and voted on a rainy and cold day. Your efforts DO make a difference!

With Horsham Township almost evenly split between Republicans and Democrats (with a few independents), shouldn’t the council and school board representation also be a mixture, rather than a Republican monopoly? Lacking regular, vigorous newspaper coverage of these meetings, or televised meetings that residents could watch from home, the best way to ensure transparency in our local government is to make it bipartisan. Be sure to vote on Nov. 7 and elect Veronica Hill-Milbourne and Bill Gallagher to township council, and Jennifer Wilson to Hatboro-Horsham School Board.

Horsham Township’s five council members are elected at-large, meaning that each council member represents the entire township, rather than one of the township’s four voting districts. It’s a small-scale version of having senators (who represent an entire state) instead of members of the House of Representatives (who represent smaller geographic areas within the state). Is this system better or worse than electing a council member from each district?

According to Benjamin Knoll, a political science professor at Centre College in Danville, Ky., about 40% of U.S. municipalities, typically larger urban areas, use district elections, and this format usually is better for representing racial and ethnic minorities, who may be clustered geographically  in a few voting districts. (Voters also may be clustered along party lines.)

Make your voice heard and vote on Tuesday.

Help out on November 7th

On Election Day, November 7, help out by working as a greeter at the polls. Greeters hand out sample ballots and assist voters in identifying which Democratic Candidates to vote for. 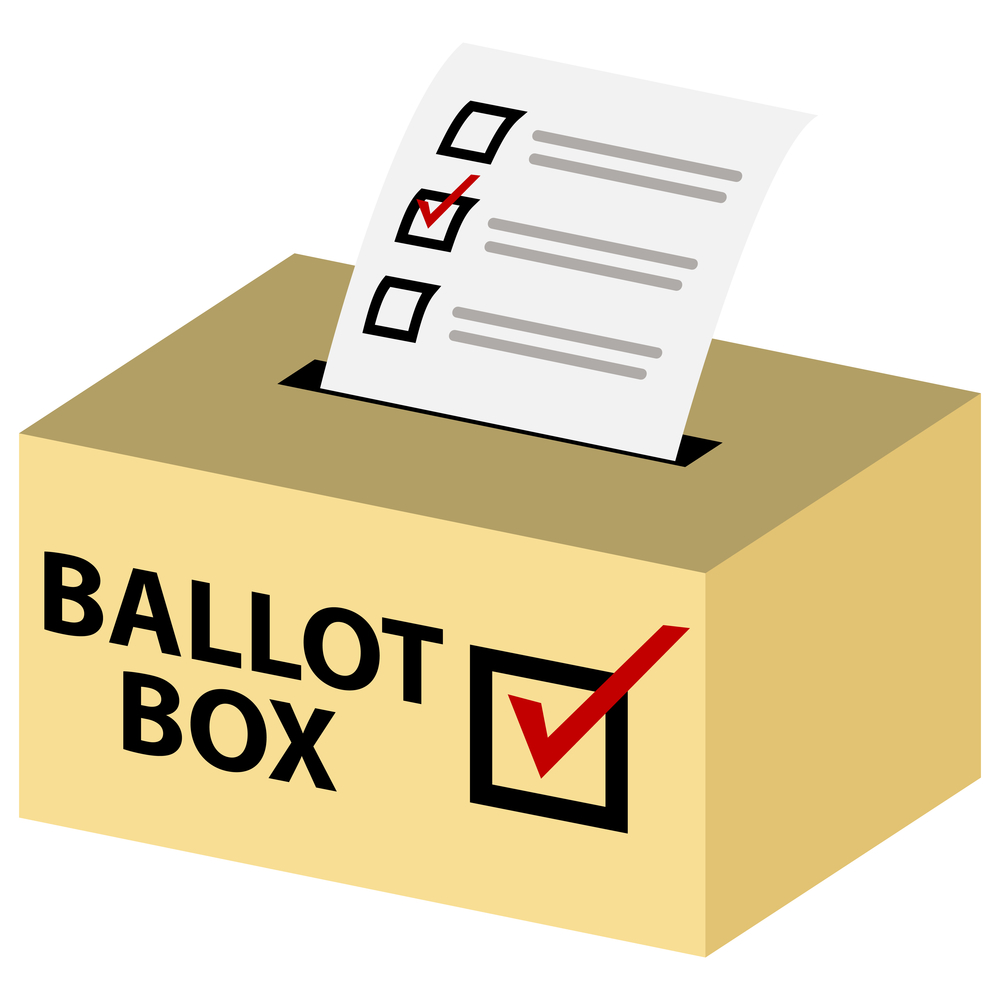