Democratic Choices in Horsham for the Primary Election on May 15, 2018

The Primary Election is fast coming upon us. This Primary Election has been marked by a certain amount of confusion created by the redistricting process. Redistricting resulted in an unfamiliar new set of Congressional District boundaries. Not only are these boundaries new, but in some cases they split precincts between two different Districts, meaning that neighbors may be presented with different choices at the polls.

This blog post is intended to provide some clarity as to the voting districts, where they are, and the choices that are presented in each district. A summary of the choices is contained in this graphic; for a better understanding of the districts and the candidates, please scroll down to the text below for more detail and links to information. 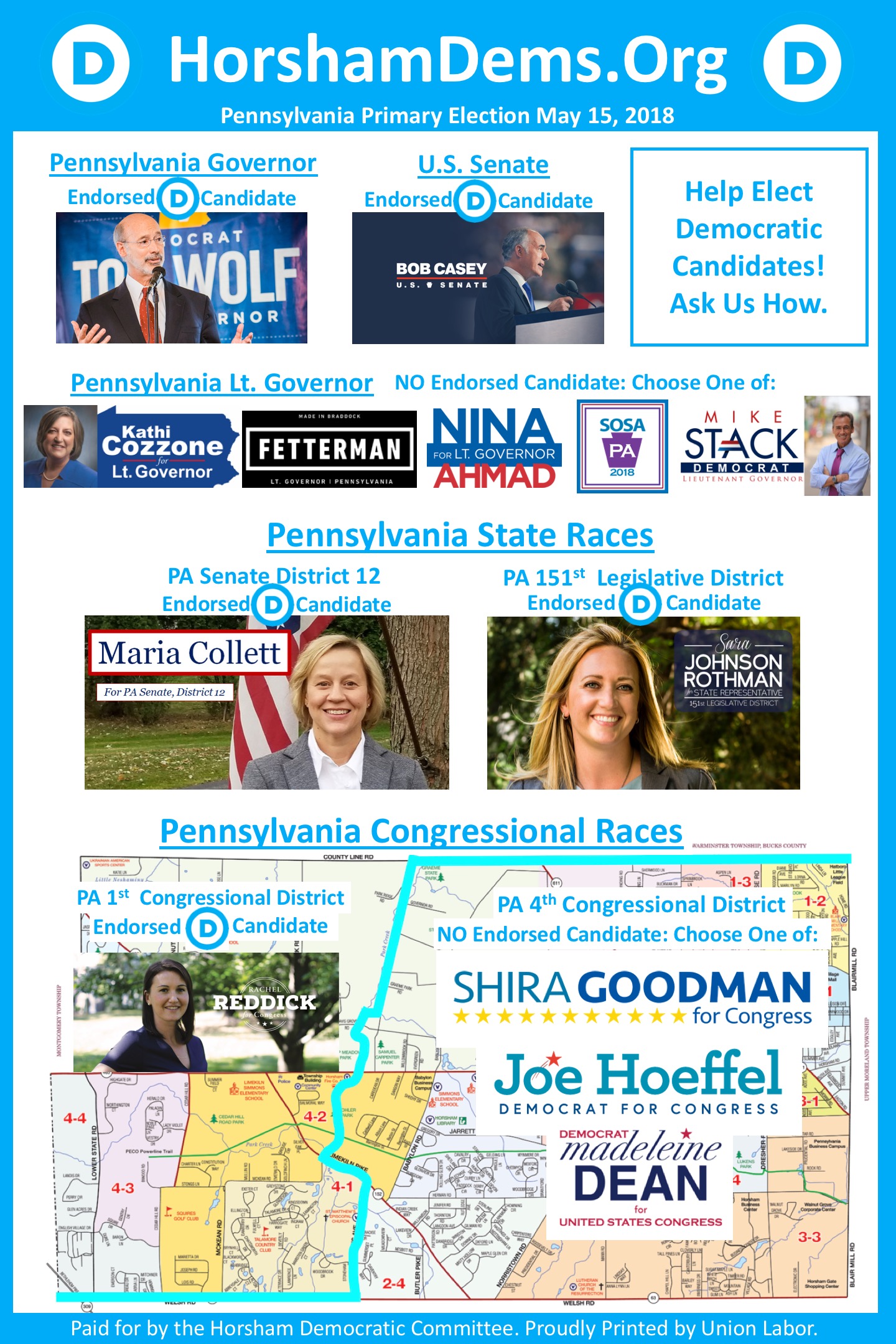 Horsham is split into many 'Precincts'. A Precinct is an area within which all of the residents vote at the same polling location. A list of the polling locations for each of the precincts can be found at the Horsham Township Website at http://www.horsham.org/pView.aspx?id=10518&catid=612:

Note that some of the polling locations have recently changed: this is due to renovations at the locations previously used.

To find out which precinct you live in, you have several choices. First, you can look at this handy map, also found on the township website at http://www.horsham.org/docview.aspx?docid=26223: 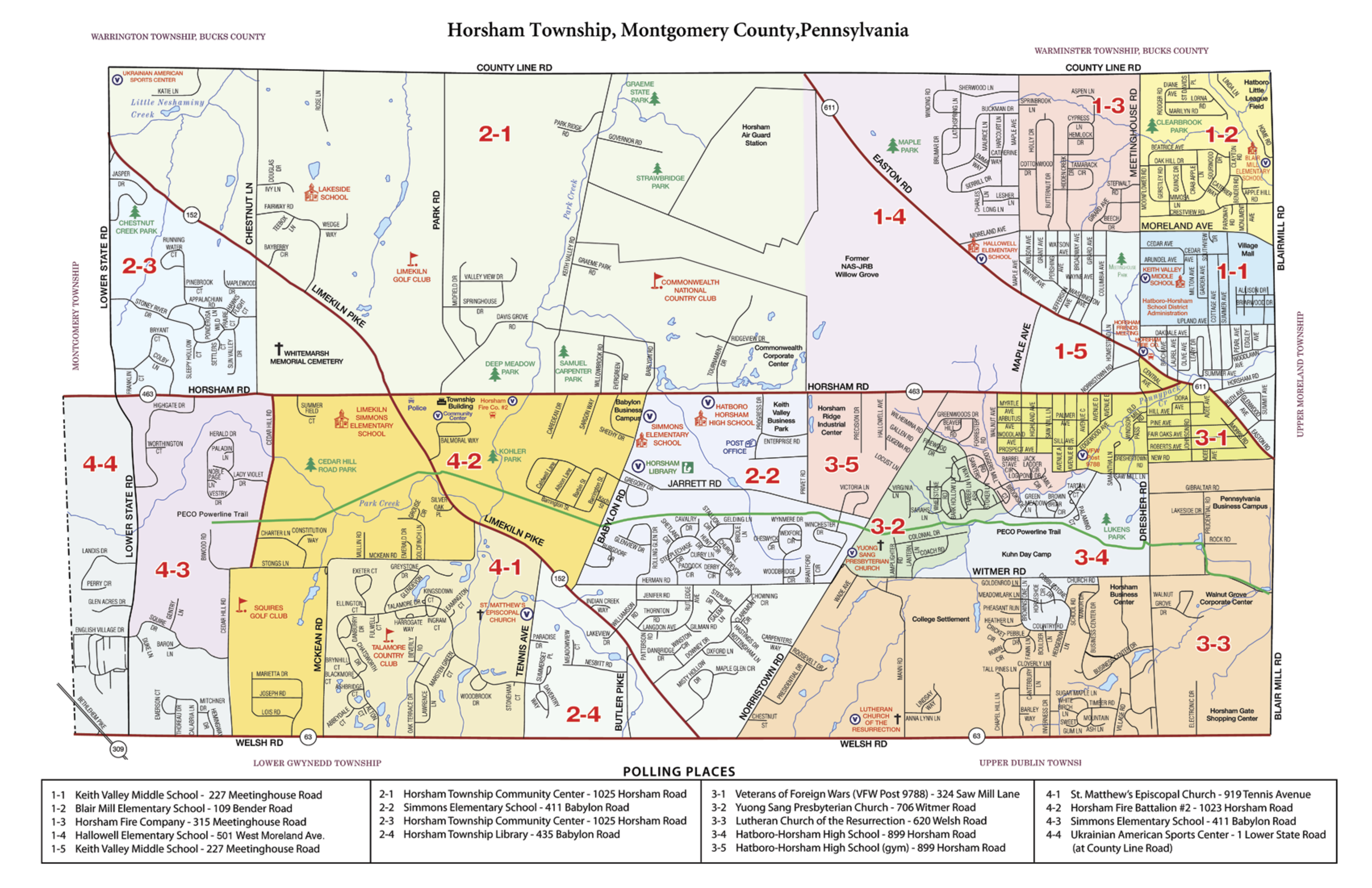 if it is difficult to discern where on the map you live, you can use this handy link which will help you identify where it is you should go to vote: Click Here To Find Your Voting Location!

Which Electoral Districts is Horsham In?

An electoral district is the geographic area represented by an elected official. Residents of the geographic area vote to determine who represents them. Horsham is part of many different Electoral Districts. Let's look at the different electoral districts Horsham residents are a part of, and the races which are occurring in each of those districts. 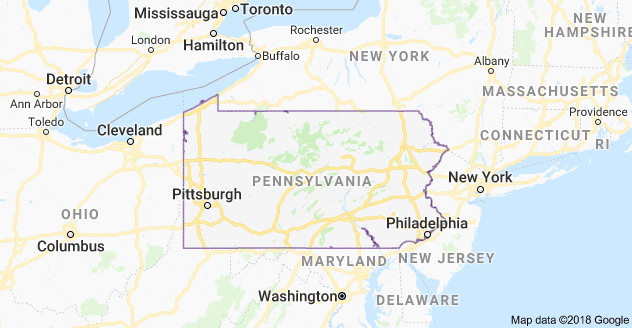 Horsham is a part of Pennsylvania. There are three statewide races in the Primary this year: Governor, Lt. Governor, and U.S. Senator.

There is one Democratic candidate for Governor endorsed by the Montgomery County Democratic Committee: the current Governor, Tom Wolf. 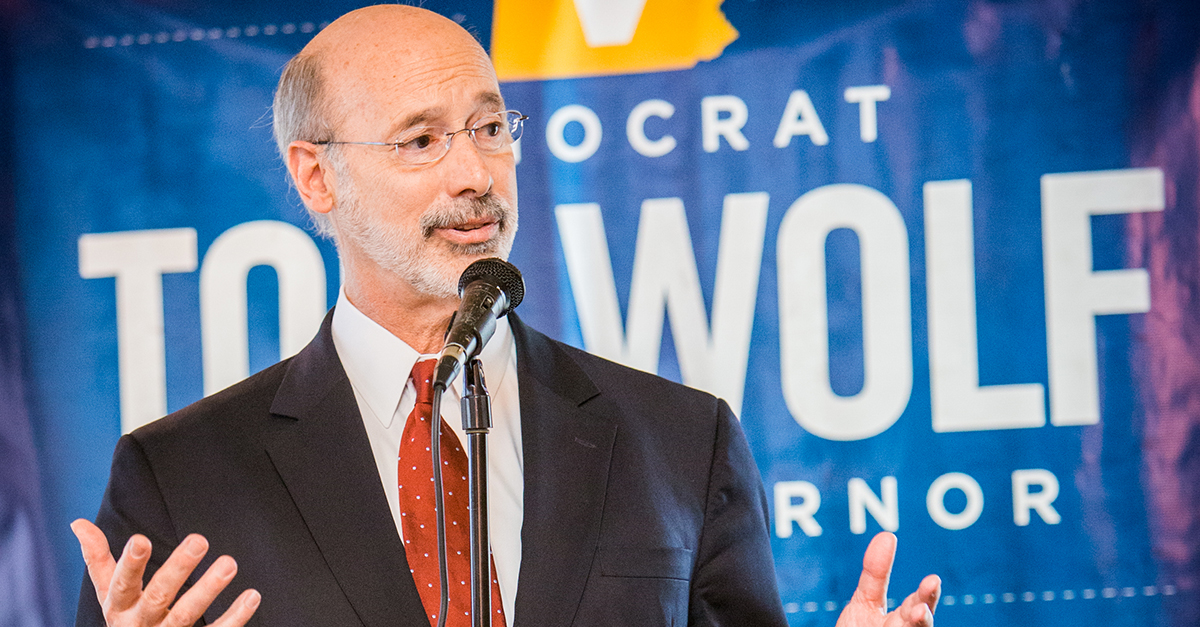 A note about endorsements. The Horsham Democratic Committee is a municipal committee within Montgomery County, Pennsylvania. Our parent committee is the Montgomery County Democratic Committee, also known as 'MCDC'. MCDC held an endorsement convention earlier this year, where Committee members gathered to vote to endorse candidates for various races. IN THIS BLOG POST, if we say a candidate has been endorsed, we mean 'by the MCDC at their endorsement meeting'. If we say there is no endorsed candidate, we mean that at the MCDC meeting, no candidate got enough votes to gain the endorsement of the committee and it was decided that a free vote should be held instead. This is important as different County Committees can endorse different candidates in the same race. When we say here a candidate has been endorsed, we mean 'by the Committee of Democrats in Montgomery County'.

There are five candidates for the position of Lt. Governor, which is also a state-wide race. There is no endorsed candidate in Montgomery County for this position. The candidates are:

There is one race for U.S. Senate this year, and one endorsed candidate, the incumbent Senator Bob Casey. 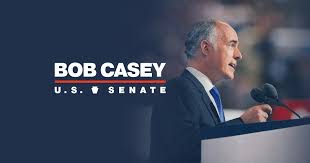 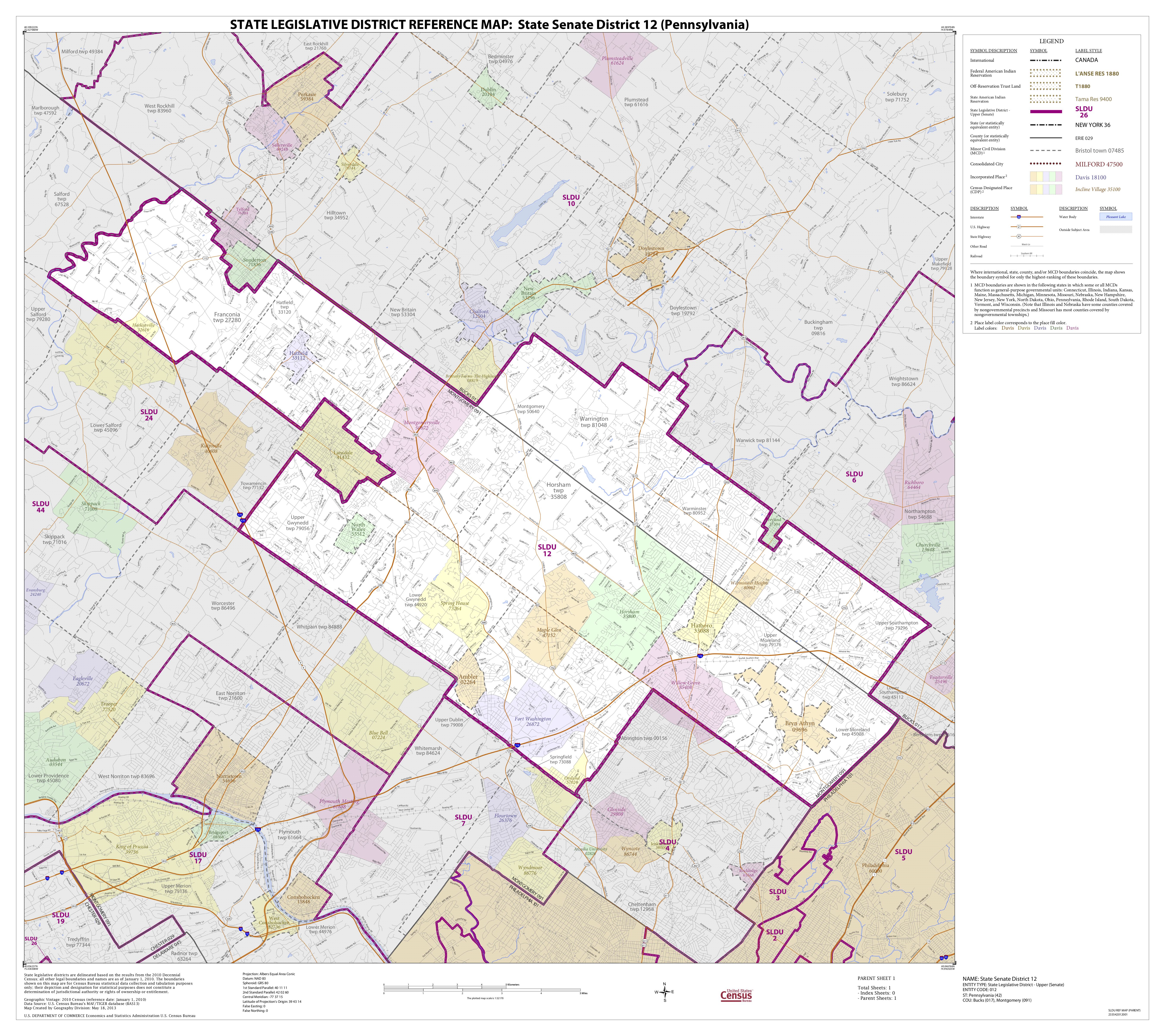 Although it may be hard to see without zooming in, Horsham includes the green colored patch in the middle of the district. There is one endorsed candidate for the PA 12 District: Maria Collett.

The 151st District of the Pennsylvania House of Representatives can be seen in this map: 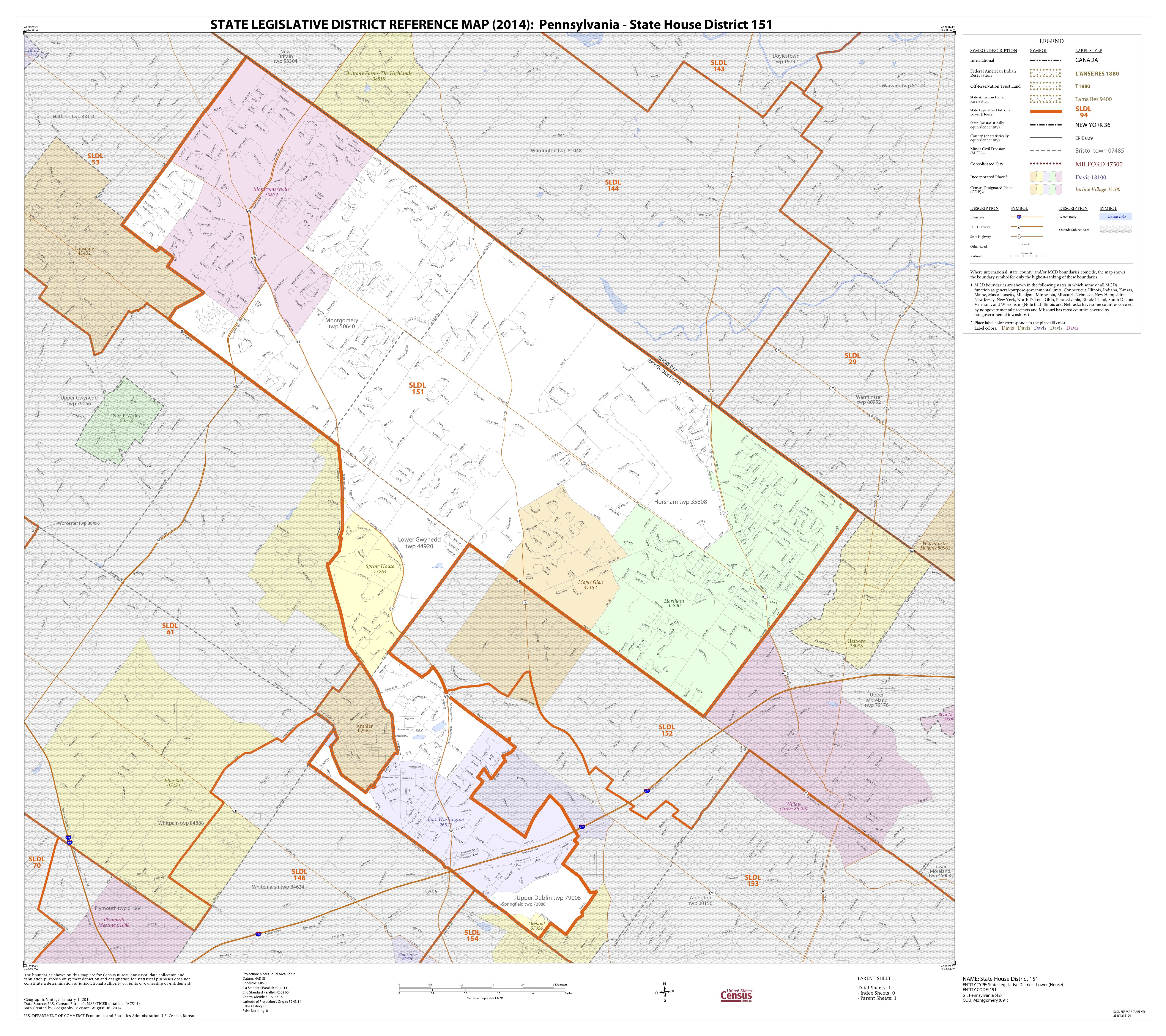 Horsham is the top right part of the District shown on the map. Again, there is a single endorsed candidate for the 151st Legislative District: Sara Johnson Rothman: 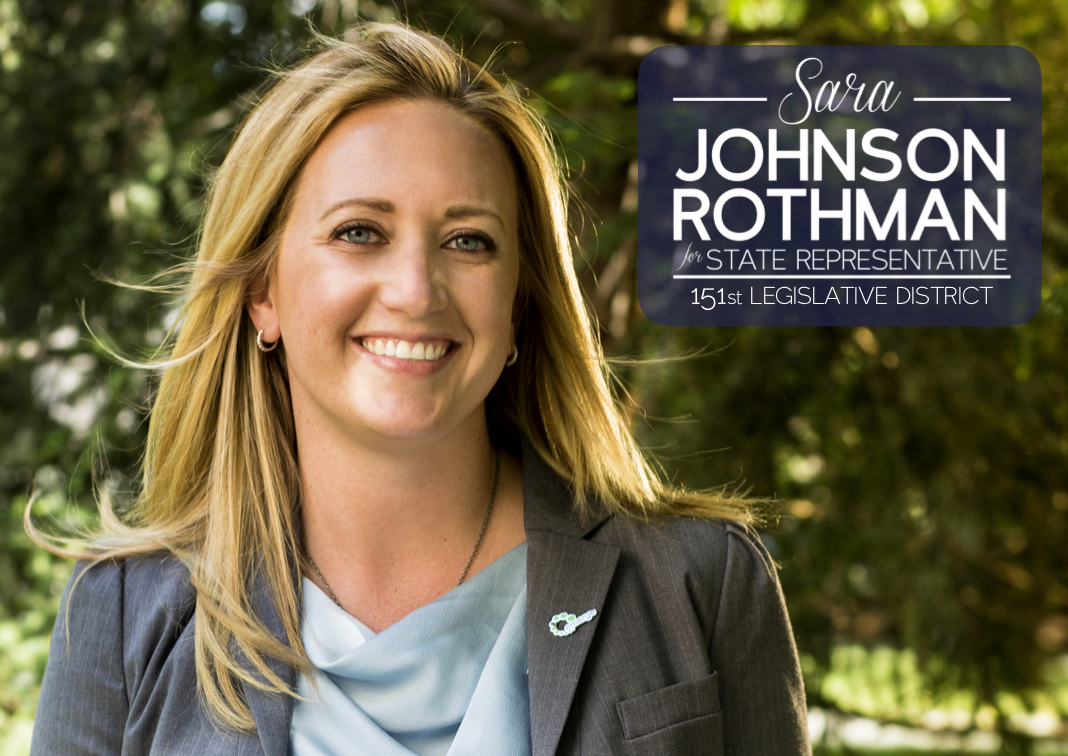 Congressional Races for the U.S. House of Representatives 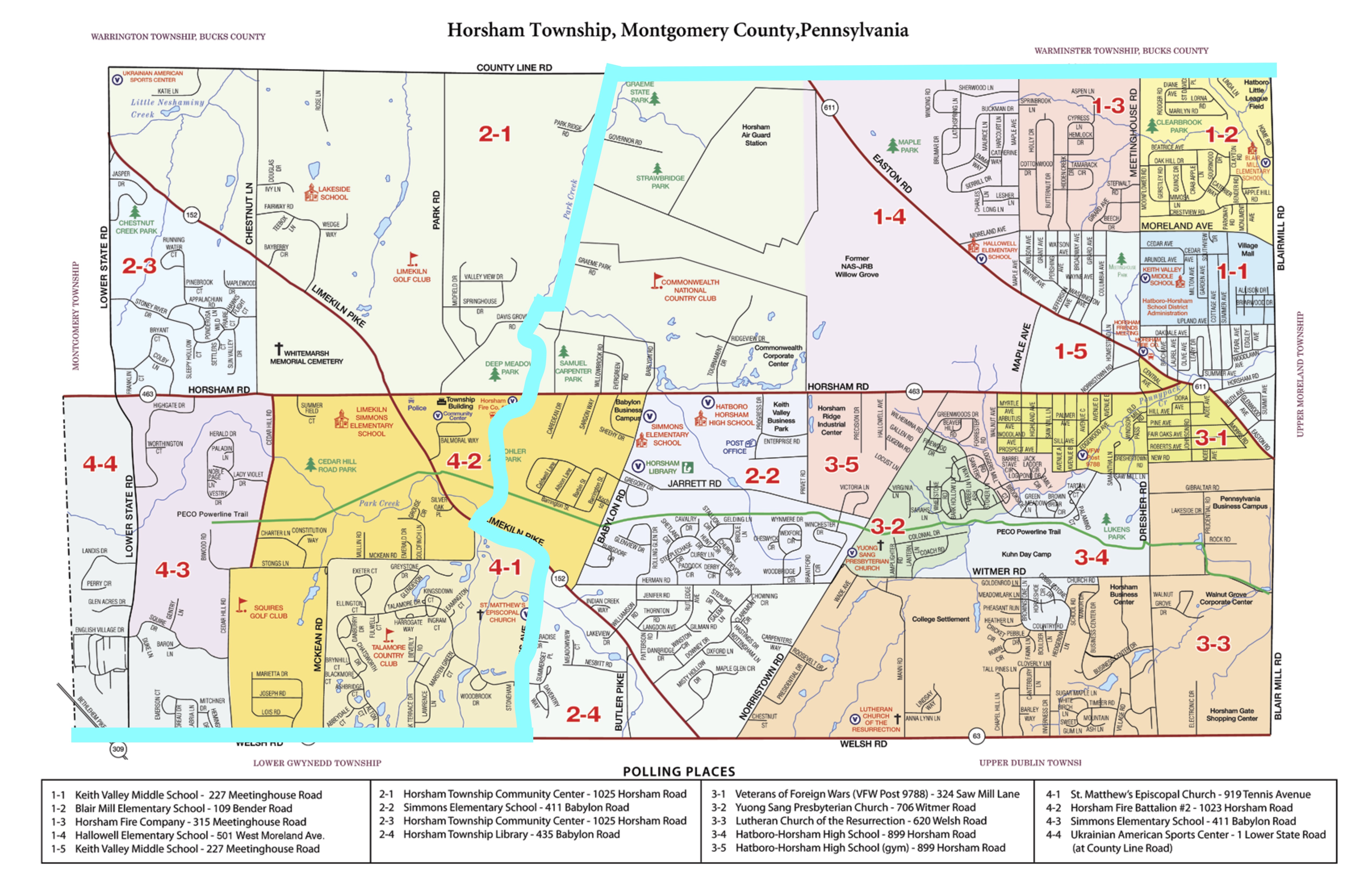 A list of which Horsham Precincts is in which Congressional District can be found here:

It should be noted that two precincts in Horsham, Precinct 2-1 and Precinct 4-2, are divided by the District Boundary. If it is difficult to identify on the map which district you reside in, you can provide your address to this web page and it will tell you.

The endorsed candidate for the U.S. 1st Congressional District is Rachel Reddick:

There is not an endorsed candidate for the 4th Congressional District, and three candidates are running:

This is a lot of information. After reading all of this, you may have questions. If you do, please reach out to us at [email protected], and we will be happy to make sure your questions are answered. As well, we will have greeters stationed at polling places throughout Horsham on Primary Election day, May 15th. The greeters will also be able to get you help with any questions or concerns you may have.

Voting in a Primary Election is an important part of the Democratic process. We hope the information presented here today will help you in your exercise of your Democratic duty, and look forward to seeing you at the polls!